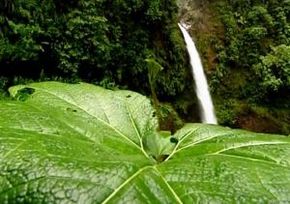 This is a film about the contrasting fortunes of two countries, Haiti and Costa Rica, which share the Caribbean. In densely populated Haiti, 30 million tons of arable lands disappear every year, impoverishing the soil and diminishing the possibilities of cultivation. Given that it takes 500 years for a 1cm layer of arable land to regenerate, that is spelling disaster for Haiti. It now looks like a desert – a man-made desert.

A generation ago, Costa Rica looked to be heading in the same direction. But this stable democracy took a different course and has attempted to take the environment into account in its development, establishing a network of reserves covering over a quarter of the country and providing incentives to villages not to destroy watersheds.

With virtually all the native vegetation removed, Haitians are prey to mudslides and lack the means to drag themselves out of poverty. While tourists clamour to visit Costa Rica, Haitians clamour to leave. Is this simply a case of good government versus bad?

Ecologist Carlos Lopez Alberto - our guide in this film – argues that Costa Rica come up with a formula for sustainable development that other countries would do well to copy. The formula sees the government intervening in the market to put a true long term price on natural resources.