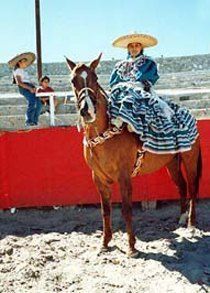 In Mexico, the mestizos (people of mixed-blood) quickly turned out to be great riders. When their descendants, the Charros, spread to the cities, they organized demonstrations of their know-how to preserve their traditions. Hence, an equestrian competition named “Charreria” which takes place every Sunday. was born. Officialized in 1933 as a national sport, this contest is an opportunity for the Charros to confront each other dressed in colourful costumes.

Sergio’s dream is to become a Charro. Thus, he trains every morning hoping to be admitted in the junior selection of Mexico City. The contest is made up of eight compulsory heats. The ninth is optional because it is especially perilous. Named “El Paso de la Muerte” (the leap of death), this figure consists of jumping from his galloping mount onto the back of an unsaddled horse.