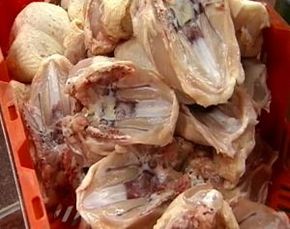 Chicken for Africa: the Dirty Trade of Leftovers

Nowhere is more chicken breast eaten than in Europe and North America, a development due primarily to the wellness craze. The industry is only delighted to serve this trend, as the breast fillet is highly profitable. But what to do with the scorned remainder of the chicken? Thighs, wings, backs and innards are produced in the abattoirs of South America, the USA, Asia and Europe but no-one there will eat them and so thousands of tons of this meat are exported yearly to developing countries.

In Ghana, these imports amount to 90,000 ton of frozen chicken parts annually. And the meat is cheap, far cheaper than anything available locally. The result is that local markets in Africa are being destroyed and people are becoming ill due to the lower-quality meat.

The film team follows the chicken pieces on their complex route from Germany, France, the Netherlands and Brazil to Africa. Taking the examples of Ghana and Togo, the devastating consequences that these exports are having on those markets and the resultant suffering of the local small farmers becomes abundantly clear.

One solution would be for Ghana to have greater flexibility to raise its import duties. However the industrial powers are remaining strong and are threatening to cut aid money intended to reduce state debts unless Ghana continues to keep its import duties for foreign poultry at the current low rate.

Chicken for Africa: the Dirty Trade of Leftovers