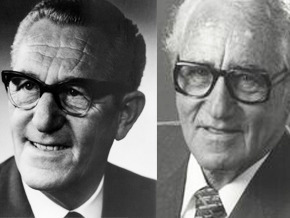 Dassler vs Dassler: Puma Against Adidas

Adidas versus Puma, or Adolf Dassler against Rudolf Dassler. A war between two brothers which would rapidly go beyond a mere family feud to become a battle of the brands. The hatred between the two brothers fuelled their economic rivalry, and vice versa. It would not only set the basis for the worldwide sports industry, but also stimulate technological research into improving sports equipment.

For almost 40 years, the duellists and their respective clans exploited their cunning, ingenuity and trickery to attempt to destroy their adversary. Not a single event, from the Olympic Games to the most minor village match, was untouched by the brothers’ rivalry, often with the athletes caught in the crossfire.  Wearing the ‘three stripes’ or sporting a Puma on one’s apparel is a sign of belonging to a camp, to a clan. Adolf and Rudolf… or the Cain and Abel of the sporting goods business.