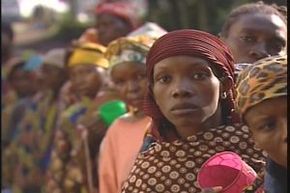 Democratic Republic of Congo: Find a Word for It

For the last ten years, the eastern provinces of the Democratic Republic of Congo have been at war. The women bear the brunt of it. The precise number of victims suffering from rape and related diseases, of which traumatic fistula is one, is impossible to know. Shunned by their community, the women are often reluctant to come forward for treatment. Instead, they are forced to bear the physical and psychological scars of their ordeal alone.

We travel to Bukavu and interview Dr. Denis Mukwege. He is director and founder of Panzi General Hospital and one of the few doctors to treat fistula. His hospital receives about 10 victims of sexual violence each day and 600 women undergo major surgery there each year. No wonder Dr. Mukwege believes that "sex has done as much injury as bombs."

Democratic Republic of Congo: Find a Word for It