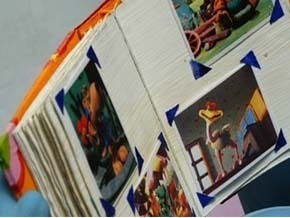 Dragon decides he wants to put together a picture book of his world. He finds his camera and sets out to document his house, himself, and his pals. First, he tries to take some pictures of the things in his house. He grabs shots of his favourite things. His fridge. His sofa. His hula hoop. His fridge again. He then heads outside to get pictures of his yard. He decides to take a picture of himself standing in his yard – which is trickier than it sounds when you don’t have a tripod. He then heads out to get pictures of his pals. He gets shots of Ostrich in super hero action and Beaver in his workplace, and then Alligator and finally Mailmouse. As he puts the finishing touches on his picture book he realizes he’s missing one very important shot – a picture of Dragon and all his pals together! They all meet in the yard and sort out their height differences and posing styles and how to take a group shot with no-one holding the camera. The last image of the episode is our lovely group portrait.