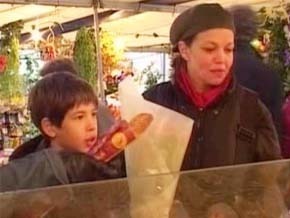 Arthur, eleven, is Parisian. But today, he is off to the French countryside. After a walk in the forest, and a small detour to see a farm, Arthur goes to Breteuil Castle, a magnificent 17th century château. Back in Paris, Arthur takes us to see the Eiffel Tower but he can’t stay long, he has to go back home to his mother. Arthur is a big boy and he has permission to take the subway by himself. On the way, he meets some friends who accompany him to the Champs Elysées, the most beautiful avenue in the world. It’s time to look in the shop windows and admire all the new cars exhibited by a French car manufacturer. After a walk around the fashion designer area, Arthur meets his mother for coffee. It’s time to go home on the bus and Arthur shows us the most beautiful Parisian monuments, the Elysee Palace and the Louvre museum with its glass pyramid. The next day, Arthur goes to buy a baguette and some cheese at the market. In the afternoon, he goes for a walk in the city center. Walking from the island of St. Louis to the Bastille, Arthur shows us Notre-Dame Cathedral, a Gothic masterpiece, the booksellers along the Seine River as well as the Bastille where the French Revolution started.