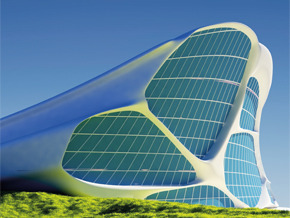 Home of the Future

To inhabit is to have a place of one’s own that both resembles and protects us. The home, in and of itself, symbolizes a multitude of universal values : comfort, security, happiness, intimacy and freedom. But we now face a new dilemma : every week, one million people around the world move into cities. At this rate, two thirds of the 9 billion people living on Earth in 2050 will be city residents. The home of the future must therefore respond to new human, social and environmental issues.

So what will homes look like in 2050? Will we live in completely modular urban spaces? Will homes be reconnected with the environment?

This episode will show how innovations in construction are burgeoning : 3D printing and material salvaging.  In cities, homes will be modular and “intelligent”, and the growing population will lead us to explore new spaces on Earth and even other planets. A special guest appearance by Philippe Starck, creator, designer & architect.

The Dreamers
Hasier Larrea, Designer and Engineer, USA
For Hasia Larrea, the reduction of space in the cities of tomorrow won’t be a problem since we will be able to infinitely modulate our interiors. Our furniture, equipped with tiny motors and tactile sensors, will change configuration based on the time of day and our desires.
His dream : To give furniture super powers.

Koen Olthuis, Architect, The Netherlands
The architect Koen Olthuis is one of the theorists behind the blue movement. His motto : space may be lacking on Earth, but the ocean is immense. He is designing floating homes that, in 2050, will respond to the environmental constraints brought on by rising sea levels.
His dream : To live on water.

Kim Binsted, Astrobiologist, USA
Kim, a scientist at NASA , is heading up and unique experiment in Hawaii that has astronauts living under a dome for several months and simulating life on Mars, including the cultivation of their own food.
Her dream : To live on Mars.

Vincent Callebaut, Architect, France
Vincent Callebaut, a pioneering architect, thinks of the city in equal terms of verticality harmony with nature. He has created an impressive initiative uniting no less than 40 projects that respect the environment, humans and ecosystems.
His dream : To transform cities into rainforests.

Massimo Moretti, Engineer, Italy
Massimo Moretti has designed the largest 3D printer in the world (12 meters high and 6 meters wide). He plans to produce low cost housing using materials such as mud and clay.
His dream : To make homes for everyone using 3D printing.

Michael Reynolds, Architect, USA
Michael Reynolds wants us to take back control over the construction of our homes. He is using new construction materials (salvaged tires, cans and aluminum or glass bottles) to make homes that are completely autonomous in terms of energy.
His dream : For everyone to be able to build his or her own “recycled home”.