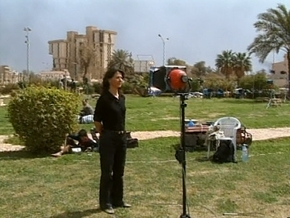 Middle East correspondent, Antonia Rados has covered numerous conflicts for RTL television, ORF and ARD: the Russian invasion of Afghanistan between 1979 and 1981, Iran during the same period, the first Gulf War and the latest Iraq conflict.

Like several other international media colleagues, from the New York Times, La Stampa, Le Figaro, to the BBC, she lived through the invasion of Iraq from the inside, in Baghdad, at the Hotel Palestine.

Constantly having to outwit and negotiate with the Iraqi information and security services, she needed to trick her minders and other translators every day in order to give a version of events and an analysis which was as close as possible to what she witnessed, saw and felt.

Her post-conflict account contrasts with the direct on-air reporting. Seen from the inner city, notably from the Palestine Hotel, she realized the regime was more concerned with avoiding a popular revolt than confronting the coalition.

Among her colleagues, not everybody shared her analysis, but they preserved a strong unity in order to protect their freedom of action, their equipment and colleagues who were not officially accredited by the Ministry of Information.

Hotel Palestine is an eye-opener for future journalists.