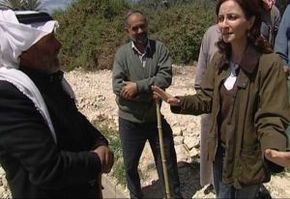 Jordan is in the part of the world where farming began. Ninety percent of the country receives less than 25 centimetres of rain a year. Without the intervention of farmers it would revert to a desert. Over the centuries, the people of this region were ingenious at developing sophisticated methods to use water sparingly. They developed water channels that fed Petra. These water channels have now lapsed into disrepair and with a burgeoning human population swelled by refugees from the Middle East conflicts, Jordan now faces a crisis.

Demand for water is so great that the Dead Sea itself is predicted to disappear. The authorities have been forced to ration water severely, restricting families to only one day a week. Despite rising domestic demand, 65% of the water is used by the farmers who stop the land from becoming a true desert.

Jordanian TV reporter, Rula Amin, believes that the media spend too much time on political issues and too little on the water crisis. She travels the length of the country and reports on whether a balance can be found to accommodate the needs of the agricultural community and the rest of the Jordanian population in tackling the problem of chronic water shortages. Is a local or regional conflict inevitable? What will happen to the Dead Sea if the countries sharing the Jordan River cannot reach an agreement?