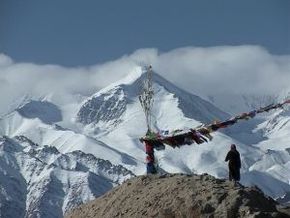 The Magic Mountain is a film that captures the beauty of the austere Himalayan landscape of Ladakh and the colourful traditions of a Tibetan Buddhist culture that must address the 21st-century dilemma of how an ancient society deals with the process of change. It is also a tribute to the power of one individual - Cynthia Hunt, the founder of HEALTH Inc. (Health, Environment and Literacy in the Himalayas) - who has truly made a difference in the developing world.

To help empower the illiterate women in far-flung villages, Hunt routinely hikes for days at a time dressed in a traditional shalwar khameez and Montreal Canadians baseball cap pulled down over her braids, as she carries a 25-kg backpack with camping gear, food and teaching materials through the rugged mountains of northwest India where government agencies and NGOs rarely go.

In total, 30 women from four different villages meet up in Leh (population 25,000) and, under Hunt’s wing, learn to negotiate the “urban” maze. In spite of the stigma of being uneducated village women, their self-confidence grows over the10 days through workshops and government meetings, and they become more assured of their capabilities. They learn the ropes of creating small businesses and building solar greenhouses which will extend the nutrients traditionally available to them and their children.