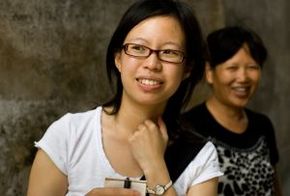 My Ancestors' House invites us on a journey like no other ... We follow Doris Ng Ingham, a twenty-five year old Sino-Canadian, who embarks on her first voyage to China in search of her ancestors. Her mission is to recover the key to her ancestral home.

Doris takes us off the beaten track to the region of Canton, from where the first Chinese immigrants came to Canada in the early 20th century. She discovers a fascinating and intimate universe, tinted with family rituals and traditions, today, increasingly under threat.

Director Suzette Lagacé and her team have managed a tour de force by travelling and filming in areas of China rarely frequented by Westerners.