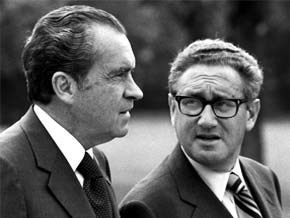 Nixon and the Kissinger Years

The period after the Second World War marks a total break with America's tradition in foreign policy matters. The U.S. found itself obliged to take on international responsibilities it had previously refused. This was the beginning of the American vision of ''World Order''.

In this three-part documentary, we trace the genesis and evolution of this decision-making, which is unique in its scope and power. Looking from the outside in, we examine how the United States exercised its world leadership in the second half of the 20th century and how their diplomats handled the major post-war crises.

There are two governments in the U.S.: one visible, its every deed documented by the media and the other invisible, confidential. This phantom power conducts its own policy and has run the U.S. foreign policy for the last 50 years. This film deals with 50 years of power of the NSC, the United States' National Security Council and focuses on the important role played by American Secretaries of State.

Each inteview will deal first and foremost with how the interviewee handled ''his'' crisis when he was in office before offering him the opportunity to comment on the way in which predecessors and successors coped with ''their'' crises... an exercise that provokes some surprising anecdotes...