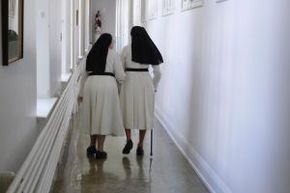 Nearly four centuries have passed since the Augustinians founded the first hospital in New France. They are still here, in the heart of Old Quebec City, but not for long.

This film portrays their remarkable contribution to the founding of the colony and in the development of our society culturally, spiritually, and medically. The Augustinians established 12 convent-hospitals throughout the province, laying the foundation of what would become Quebec's hospital care system.

Working closely with doctors and surgeons, the Augustinians were pioneer in developing nursing care, as well as pharmacology.

Today, the Order of the Augustinians consists of 178 nuns. There are less than 100 in the three monasteries in Quebec City. With an average age of 82 and no new generation of nuns entering the convent, these communities will soon disappear. However, because of their meticulous recordkeeping and and the impressive preservation of the monasteries, their life-work will live on.