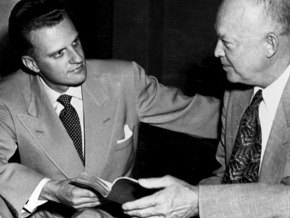 Billy Graham, the One and Only Newly Added

Billy Graham: a name, a figure, a charism.  As a "super-star" pastor, a gatherer of thousands of faithful, a pro in communication through his "televangelizations", he aroused curiosity, questioning, and sometimes controversy. Close to power, he accompanied the most powerful of this world, not only American but Russian and Asian. He was also the spiritual advisor to the White House, successively accompanying twelve US presidents. As proof, following his death on February 28, 2018, his coffin was transported to the Capitol Rotunda in Washington. For two days, the American nation paid tribute to him. An honor normally reserved for presidents and high political or military officials. Billy Graham was the fourth private citizen to be so honored.

Billy Graham, The Only and Only focuses on the «geopolitics of religion»: why are the interactions between religion and politics so strong in America? What links unite Protestantism and capitalism ? Why in a Western context of separation of powers and secularization do these links persist.

Billy Graham, the One and Only