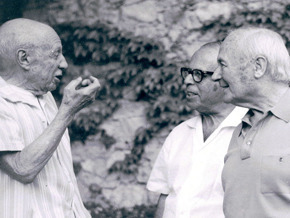 Josep Lluís Sert was a brilliant, Spanish architect and the first to attain international fame in his country. He was a man of contradictions, a contentious presence –free verse in a world dominated by replicas and serial reproductions.  He dared to be an avant-garde architect in his home country, a country ruled under the most absolute of conservatisms. His love of art brought him into contact with the likes of Le Corbusier, Picasso, Miró and Chagall.

"Like many architects, I’m a painter at heart."  J.L. Sert

He eventually emigrated to the States where he became the Dean of the Harvard School of Design between 1953 and 1969 and where he initiated the world's first urban design program.In addition, his architectural firm was responsible for the design of three major buildings for Harvard University.