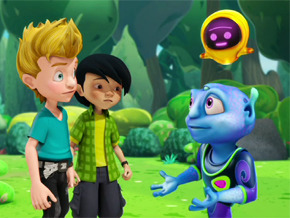 Turn Left, Turn Right, Turn Left
How does a GPS work? Jack accidentally sweeps a GPS satellite into deep space while cleaning up some space junk. The errant satellite causes Dad’s GPS to malfunction and he and the kids get hopelessly lost on their way to a concert of Sam’s favourite band. Jack has to find the satellite, put it back into place and get Dad back on track and to the concert before it starts or face the eternal wrath of Sam

Sleepwalking Jack
What is sleepwalking? A tired Jack falls asleep during a ‘sleepover’ with the kids and starts sleepwalking through his daily routine… causing all sorts of problems and noises that the kids must cover for… resulting in Jack ‘going back to bed’ in mom and dad’s bedroom as the horrified kids try to figure out how to get him out before mom or dad wake up.

Somewhere Over The Rainbow
What is a rainbow? When Sam tells Jack that leprechauns keep pots of gold at the end of a rainbow, Jack decides to chase down a rainbow and meet some the little green tricksters for himself.

See No Evil
What if we could see other types of light? Jack decides to use X‐Ray light to nab the raccoon that keeps tipping over Nico’s garbage … but everything goes wrong and Rocket ends up in Mrs Weebler’s raccoon trap instead. Now Nico must team up with the aliens to free Rocket before Mrs Weebler realizes that the raccoon in the cage is really an alien dog.