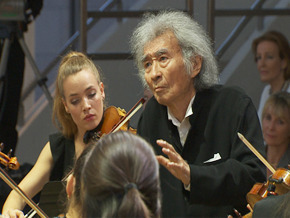 At the age of 80, Seiji Ozawa is one of the last living legends of a bygone golden age of conducting. A pupil of Charles Munch and Herbert von Karajan, he was Leonard Bernstein’s assistant before taking over as director of the prestigious Boston Symphony Orchestra, which he led for thirty years.
Ozawa’s generation was a time when a conductor could be a star. They had their eccentricities – for which they were often forgiven.

Seiji Ozawa is different: coming from Asia, he has maintained a reserve, a respect for the musicians in the orchestras he leads. He also conducts without a baton. Heavily involved in the 20th century repertoire and a much-loved teacher, Seiji Ozawa is universally admired and respected for his passion and commitment.

Dressed in red Nikes and a baseball cap (his other passion alongside music), Seiji Ozawa doesn’t look like a traditional conductor. Although he still hasn’t hung up his tailcoat completely, the maestro has considerably slowed down his activities. Having beaten cancer of the oesophagus, he now has to adhere to a strict routine in order to conserve his energy.

He has agreed to conduct some concerts in honour of his 80th birthday, but his doctors have imposed drastic restrictions upon the rehearsal sessions, limiting them to twenty-minute sessions at the end of the day – rules the maestro doesn’t always respect.