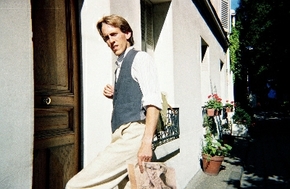 In the Footsteps of Rene Richard

The painter René Richard (1895-1982), the son of Swiss immigrants who settled in Alberta, lived the first half of his life in the woods under very challenging circumstances. His goal was to obtain greater self-knowledge. Richard chose to live among the Crie and Inuit, and it was their vast open spaces that nurtured his need to be an artist.

In 1927, he journeyed to Paris to study painting. There he encountered the Canadian painter Clarence Gagnon, who became his mentor. Upon his return to Canada in 1930, he resumed the life of a trapper in Manitoba.

In 1938 he moved to Baie St-Paul (Quebec), where, until his death, he painted his colourful and luminous landscapes in a style characteristic of 1950's Quebec expressionism.