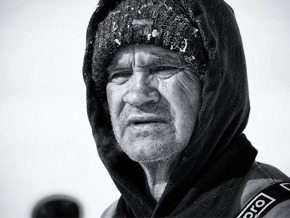 As world food shortages loom large Commercial Ice Fishers in Northern Canada are leaving a majority of their catch to rot on the ice.  Water quality and industrial pollution are changing fragile ecosystems.

In Central Canada, ice fishing isn't just a sport, but an industry that thrives in the Aboriginal communities that rely on it to survive. These Aboriginal fishers aren't just fighting Mother Nature's extreme conditions, but they struggle to sustain their livelihood as government bureaucracy threatens to force them to look elsewhere for income.

Any hope to keep a semblance of this past tradition alive becomes bleaker with each passing season. Few Aboriginal fishers remain with younger generations looking elsewhere for work, however a small number are taking matters into their own hands and fighting to change the game.

Troubled Waters takes us on a journey of discovery and sheds light on this fishery in peril.