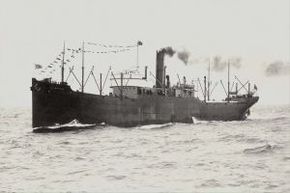 In the Wake of the Titanic: the CGS Montmagny Story

In the weeks that followed the sinking of the Titanic in April 1912, the CGS Montmagny, a Canadian resupply ship, is chartered to recover the victims’ corpses. The expedition allows a number of corpses to be pulled from the ocean, including one still grasping a life preserver almost a month after the disappearance of the liner.

Two years later, the Montmagny shares the same tragic fate as the Titanic: it goes down in its turn, hit by the collier Lingan, leading to the death of an officer and two families of passengers. Since then, the Montmagny has disappeared from memory.

This fascinating documentary uncovers the unknown story of this modest vessel with the aid of archival documents, including some never before seen on screen, interviews with historians and gripping reconstructions. Besides the discovery of the wreck, the production team is even able to find a priceless relic from the Titanic : the life preserver salvaged by the Montmagny’s crew.