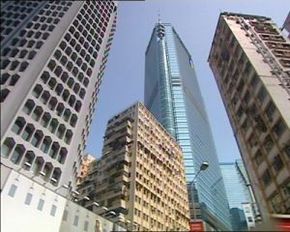 Building higher, even higher, is the culmination of an ancient dream, from the mythical tower of Babel to the Eiffel Tower. A landmark feature for over two centuries in the cityscapes of New York, Chicago, Rio or Sao Paulo, towers are now reached Asia where they are beating all records for height.

A building over one kilometre high is being planned in Malaysia. Far from going out of fashion, this architectural challenge has become the essential element of the contemporary urban landscape. Its current omnipresence can be explained partly by the need to gain space in cities that are more and more satured, but not entirely.

The absolute symbol of economic growth, the tower is the prerogative of the superpowers, but in countries that are developing, they are an assertion of their success.

In Paris or New York, towers crowd the business districts. In Dubai and Shanghai these giants of concrete and steel have radically transformed the shoreline.

Everywhere, architects rival each other in originality: round, triangular, twisted, cigar-shaped, military shell-shaped or even in the form of an icy peak… All have their special place in the typology of modern architecture, which encourages research into new, ever stronger and lighter materials.

On the frontier where architecture, urbanism, economics and sociology meet, this documentary does the tour of the towers of the world, with commentaries from their engineers and some of the greatest of contemporary architects: Jean Nouvel, Christian de Partzamparc, Paul Andreu, Norman Foster…