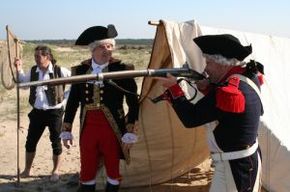 The Explorers presents 5 illustrious adventurers who were instrumental in mapping the Americas and the Pacific between the 15th and 18th centuries. Through the use of 3-D animation, archival images, maps and dramatizations, we learn how these explorers opened the new world to Europe.

1. Bougainville: Exploration of the oceans has always excited the imagination. In the 15th century they spoke of the “sea of shadows” and charts were adorned with monsters. Driven by the trade in spices and other valuable good, and under the cloak of evangelisation, the world got rich from the new lands. The sea monsters disappeared from the charts and the whales were hunted. Portugal, Spain, Holland and soon England all got rich in turn. And in the 18th century, France slips quietly into this international context, led by the “enlightened ones”. Illuminated by science and philosophy, the century posed a fundamental question: who would be master of that famous Austral continent that was said to balance the Earth? Does it really exist?And under the pen of a certain Louis Antoine de Bougainville, the West is plunged into the sweet atmosphere of an island that has never ceased to inspire dreams: Tahiti. The Pacific is rediscovered two centuries after it was crossed by Quiros and Mendana in 1567 and 1595. No one had been able to find it before Wallis… an Englishman. That was a few months before Bougainville, the Frenchman.

2. Amerigo Vespucci:Of all the great explorers who contributed to the exploration of our world, Amerigo Vespucci is the one who will give his name to the “new world”. While Christopher Columbus sails round and round the islands of the Caribbean for over a month in search of the “West Indies”, Amerigo Vespucci sails down the coast of South America and his epic voyage will result in the first mapping of Brazil as we know it today. This extraordinary tale of the discovery of the shapes of the continents will be punctuated with contributions from Claudie Haignerée, a world-famous astronaut and 20th century explorer, filmed in the Toulouse Space Centre, and by a perspective on the evolution of map making over the centuries, explained by Hélène Richard, Head of the Maps and Charts Department at the National Library of France, who welcomed us into the prestigious setting so charged with history. The film, which is a blend of real images, dramatic sequences with actors in costume and 3D imagery, will take us deep into the secret world of those who mapped the unknown face of the world.

3. Magellan: The exploration of the oceans and of new worlds often ends with disappearances, voyages without return. However, some do succeed in getting through, survivors of a hell that is all the more testing because at that time one would suffer from cold, hunger and sickness… mutinies and punishments! And it was such a fury that Magellan and his men were to encounter during their circumnavigation… the first circumnavigation in human history. The circumnavigation, because of the route taken by Magellan and his fleet, is similar to the courses taken by ocean racing sailors today. And so it is Jean-Yves Bernot, navigator for the new single-handed round-the-world yachtsman, Francis Joyon, and a passionate student of the story of Magellan, who will draw the parallel for us using charts and weather models in support. This second episode on the great explorers will use the same directorial principles: dramatic sequences with actors, animated charts and 3D animation, in order to allow us to illustrate this next maritime epic adventure.

4. La Pérouse: It’s 1782 and, aboard the Astrée, a young ship’s captain named Jean-Francois de Galaup, Comte de Lapérouse, is leading an expedition in the Hudson Bay. This episode, which was to have no resounding strategic importance, was nevertheless to constitute a formative episode in the life of Lapérouse. For his navigational skills, his sense of humanity and his military intelligence were to mark minds, not only in France, but in Great Britain… His destiny was underway. Louis XVI, passionate about geography and navigation, decides to entrust Lapérouse with the first great French scientific campaign on a global scale. The objective will be to complement and complete the work of the great Captain Cook. Lapérouse sails from Brest on August 1 1785 aboard the Boussole, accompanied by the Astrolabe for a voyage that will last two and a half years. On board are naturalists, astrologers, cartographers and draughtsmen who will take the measure of this new world. Navigational tools are revolutionary (clocks and watches, compass, etc.). The maps of the world are transformed. Latitudes and longitudes appear, allowing the precise positioning of the various continents and their hosts of islands. On Lapérouse’s world map feature New Zealand, Australia, the Torres Strait, Hawaii, the Bering Strait… The first works produced by the expedition are entrusted to Barthélemy de Lesseps. After a voyage of more than 16,000 km, the later will finally hand the documents to Louis XVI. After another layover in Botany Bay, Australia, on January 26 1788, the Boussole and the Astrolabe will show no further signs of life…

5. Cook: A boy is at window watching a ship sail by in the distance… It is 1745 and Cook is 16 years old. He is apprenticed to a haberdasher in Staithes, a fishing village. And according to legend, Cook first felt the call of the sea when he looked out of the shop window. James Cook’s destiny is underway! It is in 1769 that Cook takes to sea for his first voyage around the world. The charts available to him are the same as those of Bougainville. And an idea dating back to Ptolemy is till clinging on… it is said that there is a gigantic Austral continent whose extremity reaches up into the Pacific and which is bordered by Esperitu Santo (the New Hebrides), New Zealand and Australia (New Holland) attached to New Guinea, with the whole of these coasts forming but one single land! And it is Cook who will demonstrate what is really there… Cook will carry out two further voyages between 1772 and 1779 that will take him to the two extremities of the globe. From the North Pole to the South Pole.
James Cook leaves a colossal heritage. It will be attributed to his enormous sense of seamanship, of his advanced skills at cartography, his courage in exploring dangerous regions to verify the accuracy of facts reported by others, his ability to lead men and to be concerned for the state of their health in rude conditions, in addition to his ambition and constantly seeking to go beyond instructions received from the Admiralty. “Farther than any man had ever been before, but as far as it was possible for a man to go…” James Cook. Cook met his death on the island of Hawaii in 1779 during a battle with its inhabitants.